The OpenStreetMap Foundation was founded in England in 2006 as a non-profit organisation to generate free and reusable geographical data that can be used for geospatial analysis; information that the company has described as “raw data” that “can be used to make a map, but it is not [itself] a map”. Modern cartography is an exact science. The development of satellite imagery has served to highlight how much of the globe has yet to be accurately mapped. Can the OpenStreetMap initiative possibly serve as a solution to this challenge? 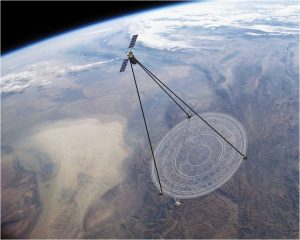 Widespread use of satellite technology (not least through smartphones) has encouraged “crowdsourcing” initiatives whereby the general public can volunteer information via the Internet. An intended incentive to encourage this development in the field of cartography is the Humanitarian OpenStreetMap Team (HOSM). This is a voluntary organisation registered under US law that seeks to map areas that have been designated by Hilary Clinton’s Health Access Initiative as requiring medical facilities but have not yet been properly mapped.

The link between OpenStreetMap (which neither stores nor offers satellite imagery) and HOSM (which is hosted by Imperial College London) is DigitalGlobe, a commercial American company that provides both the satellite imagery and the map editing software that enables the general public to volunteer information on HOSM. A recent initiative operating on the same principle is GlobalXplorer; an archaeological mapping project (supported by National Geographic and NASA) that uses satellite imagery. However, while the latter is a project that can allow room for error without any potentially serious consequences, is the same true for cartography for humanitarian purposes?

The possibility of error in even highly professional mapping projects is perhaps highlighted by the story on Wikipedia regarding the US Department of Defence’s National Geospatial Intelligence Agency (NGA). It also works with Digital Globe (the provider of images for Google Earth and Google Maps), as well Google and Microsoft, but such combined expertise did not prevent an US Navy ship from being grounded during 2013 through relying on a digital map that misplaced a reef by eight miles. Whether true or not, this story surely illustrates that inaccurate information is not only counterproductive but also potentially dangerous when it comes to mapping. Is this a potential problem with cartography for humanitarian purposes? As the author is not a smartphone user, the app-based MapSwipe service was not a practical alternative to examine this question. Therefore, it was decided to focus exclusively on Humanitarian OpenStreetMap by creating an account and examining the project in closer detail.

The first thing one discovers on signing up for a Humanitarian OpenStreetMap account is that its map identity editor (or iD editor) is remarkably easy to use. It offers three tools to edit a map; namely, points, to indicate places; lines, to indicate roads or paths; and areas, to indicate the outline of buildings, fields or any other large objects. As a case study, I took part in the project entitled “Jigawa State Road Network Mapping for Vaccine Delivery Routing”. This is based on satellite images of Nigeria. As is the case in the GlobalXplorer project, these images are subdivided to very many degrees into grids, known as ‘tiles’, in order to focus more closely on a particular area. Users are required to work on mapping one grid, or ‘tile’, at a time. At first, I found this a novel procedure. By using the ‘line marking’ facility, I was able to indicate paths that connected various villages, such as in the screenshot below: 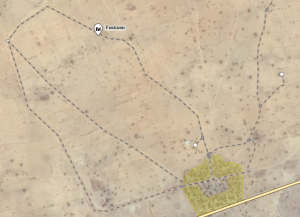 On another tile I worked to highlight alternative routes between villages, such as in the example below:

On another tile, I worked to try to link routes. However, at this stage doubts came into my mind as to the value of the process. I tagged all the routes that I identified as ‘paths’ in order to indicate that they did not seem to be gravel roads. As one can see from the screenshot below, however, there were surrounding areas that I did not know whether or not it would be correct to mark as paths. Were these truly safe paths, free from any potential obstacles and on entirely solid ground? And, if not, could I be absolutely sure that those paths I did mark are?

Inspection of marks created by other users, as well as a re-examination of the instructional video about using the iD editor provided by Humanitarian OpenStreetMap itself, highlighted the frequency of inaccurate markings. Even though all markings are supposed to be peer-reviewed in time, the peer-reviewer who created the onsite video judged that these inaccuracies were not really all that important. This surprised me.

Can I tell enough from a satellite image, such as the one above, about the quality of land in question to make informed judgments that it is a safe route? The Humanitarian OpenStreetMap site gave absolutely no information, or guidelines, to answer this question. Such doubts led me to examine the more recent GlobalXplorer project for useful information, or guidelines, on how best to study satellite imagery. This was no more encouraging. A six-minute video ended with the announcement that potential users, having watched this video, were now “half-way through your training as a space archaeologist”. This is despite the fact that the video announced (or perhaps one should say “admitted”) that it is very difficult to tell the difference between piles of dirt and archaeological digs from satellite imagery. This tutorial provided me with only two useful tips. First, that perfect linear markings are not generally evident in nature and so can often be used to identify anthropogenic, or man-made, features in a landscape. Second, that scale bars can potentially be used to identify the size of objects, although to follow the latter piece of advice would seem to necessitate attempting to reduce the size of the tiles provided to users to several more degrees.

What did I learn from the experience of engaging with Humanitarian OpenStreetMap (HOSM)? The notion of freely available satellite imagery being used for good seems particularly positive. It reflects the idea behind the ‘citizen science’ movement: that technology can help address social challenges more effectively not least through allowing scientists and the general public to work together, by workshops or other means. Be that as it may, my assessment of the implications of what I contributed to HOSM did not create a comfortable feeling. In particular, I would shudder to think that a map I helped to create could, in any way, be inadvertently responsible for an ambulance failing to reach its destination. To contribute any more to such a project therefore seemed almost irresponsible. Another unappealing feature was that the contributor terms for OpenStreetMap, which one must accept before being allowed to use HOSM, also seemed to involve strange “miscellaneous” provisions that seemed to indicate that the legal parameters of this project are not very clearly defined, which may or may not be a common feature to crowdsourced projects with an intentionally open ended and international, or “global”, user base. I wonder if Lawrence Lessig has turned his legal mind to this particular phenomenon?

My main conclusion from this exercise was that there is a significant difference between research projects that use mapping as a data visualisation tool (a recent example being an attempt to map all the world’s archival institutions by a Brazilian archivist at map.arquivista.net) and projects in which more specialist geospatial skills, such as those of a geographer, are an evident requirement. The creator of GlobalXplorer, Sarah Parcak, has also written a specialist study Satellite remote sensing for archaeology on how to use light spectrum analysis techniques in studying satellite imagery in order to detect what lies both on and beneath the surface of the earth. I therefore find it a little surprising that she can feel confident about the entirely random users of her crowdsourced GlobalXplorer project, which is based on the same simplistic mapping technique of HOSM. The great possibility of inaccurate information being mapped is a reason why I am inclined to believe that cartography must be “left to the professionals”; namely, geographers or those with specialist training in the use of Geographical Information Systems (GIS). Past readings by this author on the use of GIS for historical studies served only to remind him that this is a specialist field that I am certainly not well qualified to pursue without much more extensive study.

The ‘citizen science’ movement has some notable patrons, including University College London and its EXCITES project, which is associated with Nominet Trust (described as ‘the UK’s only dedicated TechforGood funder’), and its most visible face in the United States may be the Zooinverse and Open Genomics Engine projects. I was certainly impressed by Sarah Parcak’s award-winning lecture to Technology, Entertainment & Design (TED) about how satellite light-spectrum analysis of the earth may infinitely expand the possibilities of archaeological discoveries in the future. However, it seems to me that the connotations of both her research and methods are likely to remain within her specialised academic field, and that her enthusiasm for the idea that a citizen-science movement of the 21st century will ‘democratise the process of archaeological discovery’ via smartphone usage essentially rests on an assumption that all big data generated is inherently good data, in the process effectively ignoring that inaccurate data essentially amounts to no real data at all. Perhaps User Generated Content for all mapping projects may best originate with either authors on location or else with those that have direct knowledge of a location; the latter being a trait of the recent MapLesotho project.