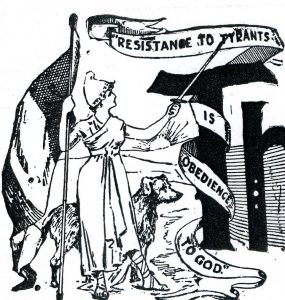 The Internet has become a forum for scholarship since the 2000s. Since that time, there has been a growing emphasis upon the idea of “public history”. This means historians are encouraged to engage with society as much as possible through non-academic means, principally the media. Scholars are expected to engage in “outreach” activities in much the same way as libraries, archives and museums are expected to increase their number of visitors by enhancing their visibility and profile in the business world. Everyone, as well as everything, is now expected to have a saleable public profile, even if it is just a ‘facebook selfie’. This would seem to be a good idea in that it seems to emphasise that all individuals should seek to contribute to and serve society as much as possible. But does it represent a more longstanding historical trend?

It has often been suggested that a reaction against “ivory tower” thinking has been a prevalent feature of European life ever since an emphasis on the idea of ‘globalisation’ developed in the wake of the Second World War. One might say that a visual representation of this trend was Hugh Honour and John Fleming’s A World History of Art (1981), which had an equal emphasis upon every corner of the globe and no distinctions made between supposedly primitive and more sophisticated means of expression. A literary representation might be Australian author John Carey’s The intellectuals and the masses: pride and prejudice among the literary intelligentsia 1880-1939 (1992). As the book’s blurb noted, Carey saw himself as ‘exposing the revulsion from common humanity’ that had been a feature of the thinking of most ‘canonized writers’ of the early twentieth-century, most of whom were European rather than Americans or, indeed, Australians, and despised popular means of expression such as journalism or cinema. A desire to emphasis the equality of different mediums for human expression has evidently led to a re-evaluation of the written word. For instance, if film as a medium has more popular appeal than a book one could argue that this does mean that film is of any less value as a medium for communication. If anything, it may have a more direct and powerful impact upon its audience. If this is also the purpose of the “outreach” activities of “public history”, however, then one might wonder whether or not some mediums for communication have indirectly become undervalued.

Shortly before I first embarked on nineteenth-century historical research during the late 1990s, it seemed like many historians overreacted to Neil Jordan’s film Michael Collins (1996). Conferences and publications were suddenly launched that seemed to revolve around that film, rather than historical research being done. Twenty years later, it seems that many Irish historians are still fascinated with this film as well as Ken Loach’s The Wind That Shakes The Barley (2006) as if cinematic representations are a very important manner indeed. As a determined young researcher, I judged that it was better not to see these films at all, or else to forget them as soon as they were seen, as they were not works of historical research. But was this a fair assessment?

During the 1990s, various films seem to have made an impact upon historical thinking in their host countries as much as some films did within Ireland. For instance, The Lady and The Duke (1994), a French film by Eric Rohmer (perhaps the most notable Catholic cinematic artist of the last century, who initially studied to be a historian), apparently stimulated a big controversy in France after it was denounced in some quarters as ‘royalist propaganda’ that sought to undermine the ideals of the (two centuries old) French Revolution. Around the same time, the internationally released Russian film Burnt by the Sun (1994) was interpreted by many in Russia as having shown how the ideals of the Russian Revolution became misrepresented and undermined over time, as the old aristocratic and internationalist ‘white’ element gradually clawed its way back into the army, leading to purge of the ‘red’ republican element, as a result of Stalin’s regime. This film, with its patriotic overtones, was also well received in America and it is, I believe, still considered in Russia as an equally persuasive account of how the fates of chance can affect the Russian nation as Soviet films such as The Mother (1926) had been considered in their own day.

If there is no more persuasive media than cinema, what does this mean for the outreach activities of the historian? Can a lifetime of scholarship compete with a persuasive five-minute long cinematic dramatisation within a film? The answer to this question would seem to be ‘no’. Does this mean that “public historians” should aspire to be filmmakers rather than teachers? Should youtube videos be considered a new form of online colleges?

If the fate of scholarship is that it is to be largely ignored, this could be considered as nothing particularly new. During the nineteenth century, many considered that the communal singing of a political ballad was a more potent and persuasive means of communication than the publication of a book. This is hardly surprising, as book reading and writing is a solitary pursuit while communal singing is the opposite. As such, the growing emphasis on “public history” may not actually be particularly novel at all. Perhaps it is simply a question of “the more things seem to change, the more they actually stay the same”.